Pull-Tabs, Extended Liners, and Split Liners for Ease of Assembly 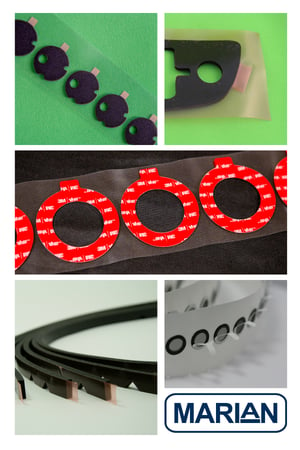 Pull-tabs, extended liners and split liners are assembly aids. They make the process of removing the liner from a die-cut adhesive part much easier. When you work with Marian, we keep your manufacturing and assembly process in mind as we develop the solution. Our goal is to make things easier for you, saving you labor and time spent during assembly,  placement, or manufacturing. Once we understand how our part will be assembled into your product, we can often offer a variety of solutions. These solutions can include (but are not limited to):

In this blog post, we are going to focus on pull-tabs, extended liners, and split liners.

As stated above, these assembly aids make the process of removing the liner, or the part from the liner much easier. Many of the parts that Marian die-cuts are made using pressure sensitive adhesives (adhesive transfer tapes, double coated tapes, single coated tapes). PSA’s are sticky, as they are designed to be! Film liners are placed on bottom and top of the sticky PSA to protect the adhesive from contamination and to keep the part in place until it is time for it to be used. It can be difficult to separate a thin film liner from a thin PSA – you need some long fingernails, and a lot of patience... unless you have a pull-tab, extended liner, or a split liner!

Below we will show you a few examples of parts Marian has manufactured that include these assembly aids. 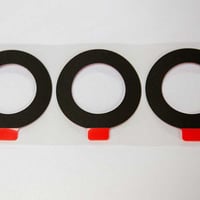 This part uses 3M VHB™ Tape which comes with a red polyethylene film liner. Utilizing a rotary die cutting process, Marian creates a pull-tab on the red PE liner. These parts are wound on a roll and sent to the customer. Once the customer places the part into the assembly, the operator can easily remove the red liner from the part utilizing the extended pull-tab.

A blue polyester film is laminated to a resealable tape, leaving the blue portion of the film “dry” or without adhesive. This makes it easier for the end user to lift the tab for use in the final product.

The part on the right is made with 3M 361 Glass Cloth Tape and a fluorosilicone paper liner. Per the customer requirements, the butterfly liner allows operators to remove half of the liner to apply the part easily before removing the remaining liner.

The part on the left is a 3M single-sided film electrical tape (Polyester / PET - with acrylic adhesive). The liner is split down the middle, which makes removal and handling easier during application. 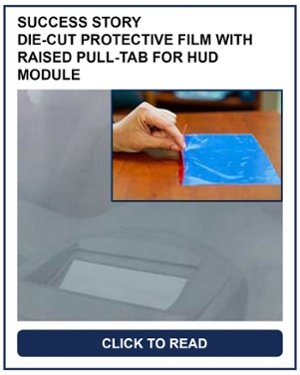 In this application, a protective film is placed onto the Class A surface of a HUD module to protect it from scratching and contamination during transport / install. The HUD module is installed into a recessed position in the dashboard, therefore an extended pull-tab would not work. Marian loves a challenge, and developed a way to manufacture this part to include a raised pull-tab, which extends off of the top of the part.

Click the links below to read the entire story and check out the video.

Does your project require a part with an assembly aid? Please contact us, we are ready to help.